Traveling to Disney during spring break is a great idea! The weather is perfect – not too hot yet not too cold – and you’ll have so much fun together as a family.

It’s no surprise that thousands of other families have the same idea and hit up Disney World during spring break as well, so crowds are a bit heavier. However, don’t let that stop you! All you need is a good plan and some good tips to get you through your visit like a pro.

So, before you book a surprise for your kids, read these tips and make your spring break trip to Disney a huge success!

Pin this blog for later! ↓ 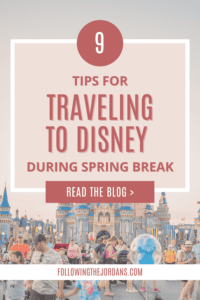 Contents hide
1 Is Disney Too Crowded During Spring Break?
2 What Should I Wear to Disney on Spring Break?
3 9 Tips for Traveling to Disney During Spring Break
3.1 1. Book Your Hotel & Dining Reservations ASAP
3.2 2. Get to the Theme Parks Ahead of Opening
3.3 3. Use Your Extra Magic Hours Wisely!
3.4 4. Use FastPass & Advance Reservations to Your Advantage
3.5 4. Know Your Plan When the Parks Open
3.6 5. Understand Disney Transportation Ahead of Time
3.7 6.Have Your Essentials
3.8 7. Bring Snacks with You
3.9 8. Don’t Dine at the Prime Times
3.10 9. Take Breaks as Needed
3.11 Related posts:

Is Disney Too Crowded During Spring Break?

Spring break varies from school to school throughout the United States, so instead of having one week with spiked attendance, Disney experiences several weeks in the spring with higher crowd levels. Spring break is more of a season than a set week or day.

Also, weekends are almost always busier during this timeframe.

What Should I Wear to Disney on Spring Break?

Figuring out what to wear to Disney during spring break is tricky. Florida weather is all over the place during these months. It feels warm and cool, wet and dry, so you have to be prepared for all weather types.

Here is what you should pack.

In general, March and April are not months for tank tops and sleeveless shirts. Expect warm or chilly days, so capris with a t-shirt or a hoodie work great. Some days, shorts and a t-shirt are ideal, while others will need pants and long sleeves. Check the weather and pack well before you leave.

Luckily, there are stores close to Disney if you need to grab some long sleeves that you didn’t pack.

9 Tips for Traveling to Disney During Spring Break

Disney World loves when you book early; that’s when you tend to get the best rates and deals. So, as soon as you decide you want to go to Disney during spring break, book your hotel!

Also, booking dining reservations is a great idea. Not only does it stop you from having to wait in line, but it also lets you eat when you want where you want.

Some reservations fill up fast. Disney lets you make dining reservations up to 60 days before your arrival, and some locations like Cinderella’s Royal Table, Ohana, and Chef Mickey will book up early. Your best bet is to book on your 60 day mark.

2. Get to the Theme Parks Ahead of Opening

One of the most important tips when traveling to Disney during spring break is to get there early. Arrive at whatever park you want to visit that day the most before opening, waiting in line. Then, head to the most popular attractions you want to see. In the first hour or two after opening, lines for rides tend to be at their shortest.

Disney often starts letting people in before the posted opening time, so arrive 30 minutes before the park opening.

We know that Magic Kingdom lets guests enter Main Street USA up to 30 minutes before the park opens, as does Animal Kingdom.

Another perk of arriving early is parking. The sooner you arrive, the better parking spot you get. Disney once again offers tram cars to their parking lots, helping you avoid the long walk.

3. Use Your Extra Magic Hours Wisely!

Speaking of getting to the parks early, Disney offers a great perk for those who stay on property. Select properties offer Extra Magic Hours, giving you anywhere from 30 minutes to one hour extra inside the park before the general public enters.

However, since Disney has around 30,000 hotel guest rooms, the park even gets crowded during these hours.

You have a few ways to use these hours.

First, go to less crowded parks, enjoying the attractions that you want to see. Everyone goes to Magic Kingdom first, so that one attracts the most attention.

If you have teens and young adults in your group, many won’t mind stay late into the evening at the park. With little kids in tow, this may not work, but the teens in your family may love riding late at night.

Some hotels offer a water park option for your Extra Magic hours. Go to the water park after hours since arriving late is no problem. Ride the most popular options at the end of the day when crowds are thin rather than hitting them up first.

4. Use FastPass & Advance Reservations to Your Advantage

Guests have three FastPass+ reservation limits per day, and you can add one more same day reservation once.

Ideally, you use the FastPass+ to book rides with the longest wait times. Here are a list of some rides to consider using your FastPass+ with.

FastPass+ is free; it’s part of the price of admission, so failing to use them is definitely not something you want to do. When visiting the park at busy times like Disney during spring break, all reservations will be distributed by noon.

4. Know Your Plan When the Parks Open

So, you got to the park early, and you headed in ahead of most other guests. Use this time wisely to get to some rides that traditionally have long wait times.

5. Understand Disney Transportation Ahead of Time

Something that trips up guests all the time is the multiple transportation options offered to Disney guests. Disney transportation is complimentary, but the wait times often are long.

Buses, boats, monorail cars, and Disney Skyliner tend to fill up quicker, and you may find yourself waiting through several cars before getting a turn.

It’s also possible to drive your own car around Disney! That means you get to have your own schedule, but know that parking booths don’t open until an hour before the parks are scheduled to open. Walt Disney World Resort guests pay for overnight hotel parking, but the parking at the theme parks is free.

Parents need to plan their trip to Disney during spring break like a battle plan, with all the necessities lined up and ready to go.

It’s not summer during spring break, but that doesn’t mean it won’t get hot in Florida. Having hand-held fans and sunscreen is a must-have for Disney in the spring.

Another thing to consider is that it rains often in the spring, so bring rain ponchos! Don’t pay the high price at the park for ponchos.

Also, always bring refillable water bottles to the park; they have refilling stations fro free. It helps save you money and keeps you hydrated.

7. Bring Snacks with You

Eat breakfast before you come to the park; I suggest grabbing breakfast at your hotel. Most offer some sort of breakfast foods, or grab food to keep in your hotel room.

Also, make sure you bring snacks and drinks with you when you head to the parks. It helps hold your kids over to a less busy time to grab lunch or dinner, and the snacks in the park cost a small fortune.

8. Don’t Dine at the Prime Times

You might wonder what are the less busy times to grab food – let me tell you!

The restaurant lines and waits are often as long – if not longer – than some ride lines. The lunch rush is between 11 AM and 1 PM, and the dinner rush is 5 PM to 7 PM. So, if you hit up the restaurants before or after these times, the crowds are smaller.

However, even with ideal timing, make sure you take my earlier advice and make dining reservations. It’s one less thing you need to worry about, but if you forget to do so, check for last minute openings on the Disney app.

You might be there primarily to see the parks, but if your kids start to have breakdowns after a few hours, take a break from the parks.

Most resorts have pools, so head back for a swim or a nap – or both! The evening time tends to be less busy in the parks anyway, so use that to your advantage.

Hit the parks up early, leave when it gets crowded for some swimming and relaxation. Then, grab dinner – with your reservations! – and head back for an evening in the parks.

Visiting Disney during spring break is a great time! It’s not too hot or too cold, and while it’s crowded, it’s not as crowded as Christmastime. So, make the trip and have fun with your kids!

10 Best Places to Eat at Disney World with Kids

The Best Disney World Parks for Toddlers in Order

Small town mom of three and your new best “virtual” mom friend. I am a NC-based motherhood and lifestyle blogger focused on sharing helpful mom tips, keeping you up to date with your mom wardrobe and any blogging tips if you are interested in that kind of thing 😉

I see you trying to raise your kids, keep the house tidy, cook meals and try to take care of yourself. I know its hard mama, but you can do it. We can do it together. Motherhood is meant to be enjoyable.

So go ahead and reheat that coffee and give yourself some time to look around here. Drop a comment, shoot me an email, or connect with me on social media. I would love to chat <3

We use cookies on our website to give you the most relevant experience by remembering your preferences and repeat visits. By clicking “Accept All”, you consent to the use of ALL the cookies. However, you may visit "Cookie Settings" to provide a controlled consent.
Cookie SettingsAccept All
Manage consent

This website uses cookies to improve your experience while you navigate through the website. Out of these, the cookies that are categorized as necessary are stored on your browser as they are essential for the working of basic functionalities of the website. We also use third-party cookies that help us analyze and understand how you use this website. These cookies will be stored in your browser only with your consent. You also have the option to opt-out of these cookies. But opting out of some of these cookies may affect your browsing experience.
Necessary Always Enabled
Necessary cookies are absolutely essential for the website to function properly. These cookies ensure basic functionalities and security features of the website, anonymously.
Functional
Functional cookies help to perform certain functionalities like sharing the content of the website on social media platforms, collect feedbacks, and other third-party features.
Performance
Performance cookies are used to understand and analyze the key performance indexes of the website which helps in delivering a better user experience for the visitors.
Analytics
Analytical cookies are used to understand how visitors interact with the website. These cookies help provide information on metrics the number of visitors, bounce rate, traffic source, etc.
Advertisement
Advertisement cookies are used to provide visitors with relevant ads and marketing campaigns. These cookies track visitors across websites and collect information to provide customized ads.
Others
Other uncategorized cookies are those that are being analyzed and have not been classified into a category as yet.
SAVE & ACCEPT
Share via
Facebook
Twitter
LinkedIn
Mix
Email
Print
Copy Link
Powered by Social Snap
Copy link
CopyCopied
Powered by Social Snap